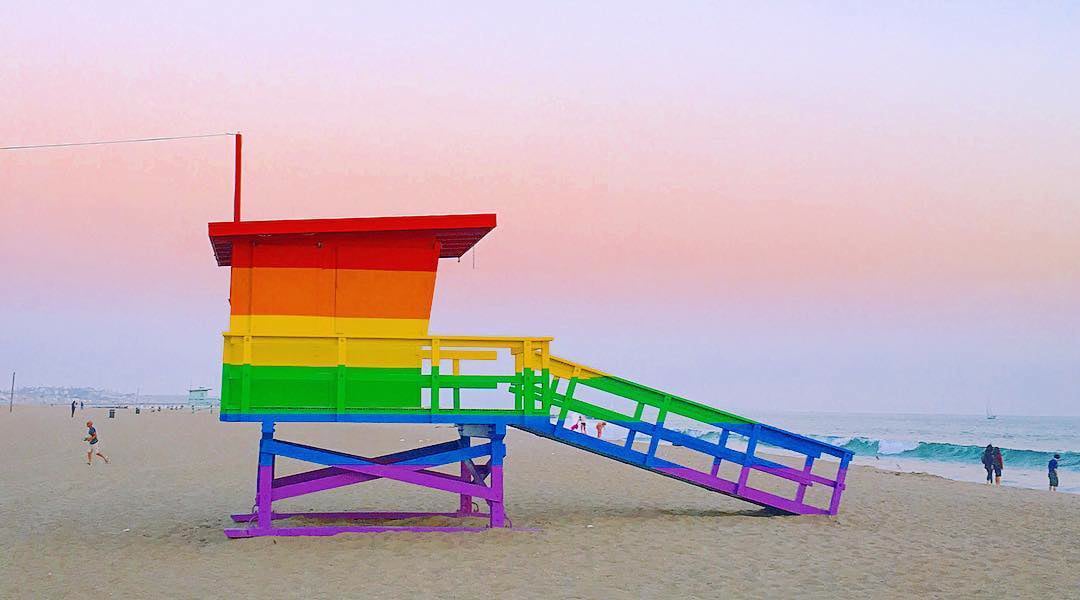 An online movement launched recently to save the Venice Pride Flag Lifeguard Tower, an art installation unveiled in June to celebrate the local events surrounding LGBT Pride Month, and it appears to have the support of some elected officials.

The installation is a county-run lifeguard tower at the foot of Brooks Avenue, painted in the colors of the rainbow flag that symbolizes gay pride. It apparently was intended as a temporary display — Sept. 8 is reported to be the day it was supposed to be transformed back to traditional baby blue — but Colin Campbell, an actor and activist, started a Change.org petition to maintain it as a rainbow-colored structure.

“In nine weeks, thousands have flocked to photograph the dramatic tower and broadcast its powerful message of equality and inclusion to millions across the globe,” according to the petition, which has more than half the signatures it’s seeking. “At a time when so much of what the LGBT community and its allies fought for is under attack, the L.A. County Board of Supervisors should save the Venice Pride Flag Lifeguard Tower by designating it a permanent public art project.”

The installation was revealed June 1, the kickoff to the second annual Venice Pride celebration, when the sand surrounding it was dedicated as Bill Rosendahl Memorial Beach, in honor of the first openly gay man elected to the L.A. City Council. Mike Bonin won the same Westside council seat after his late predecessor withdrew from council duties due to cancer. Bonin supports keeping the tower as-is.

“Hell, yes,” he said via email. “I enthusiastically support the grassroots campaign and county efforts to make the pride-colored lifeguard tower at Brooks Avenue in Venice permanent. The colorful lifeguard tower is an awesome celebration of inclusivity and LGBT pride, and I would love to see ‘the most Instagramable lifeguard tower in the world’ become a permanent part of our Venice neighborhood.”

The office of county Supervisor Sheila Kuehl also supports maintaining the lifeguard tower in its present state. However, it would take a full vote of the five-member board to ensure that the tower remains an LGBTQ icon at the northern end of the Venice Beach.

Campbell says it’s a positive symbol in an area that, while traditionally liberal, doesn’t have the same kind of support services for the LGBTQ community available in other parts of Greater Los Angeles, such as West Hollywood. Following last year’s closing of the 37-year-old Roosterfish bar on Abbot Kinney Boulevard, a hole was left in the heart of gay Venice, too, he says.

“Venice needs more of a gay presence,” he says. “It lost such a great bar last year.”

Campbell says his time at this year’s Venice Pride also had him thinking that all the young people he saw there could use some support.

“When I went to the second Venice Pride, I was surprised by all the young people in their teens and early 20s there,” he says. “I felt it was very encouraging. But I was also disturbed when [President] Trump said he no longer wanted transgender people serving in the military. Strong visual statements are very important right now.”

A permanent rainbow tower will surely continue to attract tourists. But it could also attract hate-inspired vandals. Campbell says: So what?

“Anything can attract vandals,” he says. “A church can, a synagogue can. That’s the price of being visible. To not have symbols like that because of possible vandalism is giving in to fear.”